Human Love… Lifted To The Divine 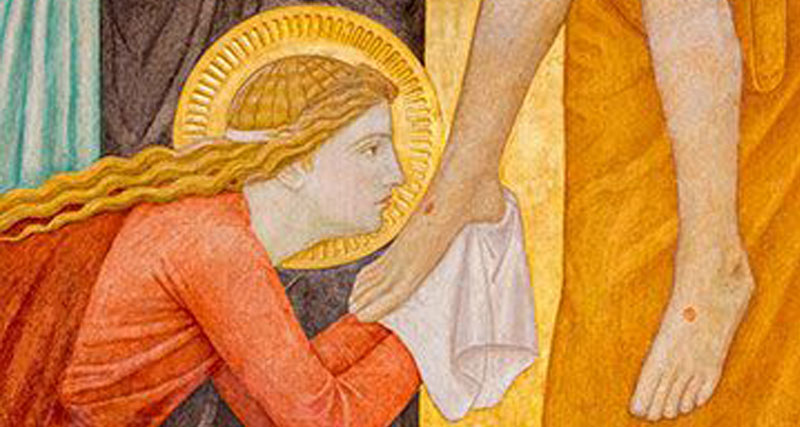 One of the most touching stories in the New Testament is the life-changing encounter that a woman, held in demonic bondage for years, had as she encountered Jesus the Redeemer of all things, and was set free from years of mental illness…years of confused thinking…years of depression.

We have no record of Mary’s parentage, her marital status or her age. She was a woman of high standing and comfortable circumstances. She lived in a thriving, populous town on the coast of Galilee about three miles from Capernaum. Dye-works and primitive textile factories added to the wealth of the community. It may be that “The Magdalene” was connected with the industry of the town for she did not seem without means. She seemed to not have home obligations, which would suggest that she was free to follow Jesus in His journeyings.

In Herbert Lockyer’s book, “All the Women of the Bible,” he states that there is not an iota of genuine evidence to suggest that Mary was a person of bad reputation. Mary, was a sinner in the sense that we all are, having been born in sin and shaped in iniquity.” She was, however, needing deliverance from demonic influence, and her affiliation with Jesus was about to become a life changer.

She is mentioned fourteen times in the gospels and she is a striking feature in eight of the fourteen passages. Mary is named in connection with other women, but she always heads the list implying that she occupies the place at the front, in service rendered by godly females. Five times where she is mentioned alone, the connection is with the death and resurrection of Christ. In one instance, her name comes after that of Jesus’ mother and aunt as they stood by the cross. No woman superseded Mary in her utter devotion to the Master.

As previously touched on, Mary suffered from the malady of periodic insanity; the seven demons would dominate her. She also seemed to struggle with nervousness, and may have been the victim of epilepsy. When Jesus saw her with peace of mind and control of will destroyed, she must have been revolting to look at. Demonic possession did not affect her morals only her mind, and Jesus saw in her something quite beyond her current state. He saw the ministering angel who would be a blessing to His own heart and to others.

As Jesus spoke in His authoritative voice, He commanded the tormenting demons to come out of her. And suddenly, her deranged and nerve-wracked mind became as tranquil as the troubled lake Jesus calmed. Sanity returned. Clothed in her right mind, she was ready to become one of His most devoted woman-disciples, to whom she owed so much. She was grateful for her physical and mental healing. Now, devotion to her Deliverer and His cause was her only focus. She gave her best to Him, who had fully emancipated her from demonic possession.

When Christ saved her, He liberated the highest virtues of sacrifice, fortitude, and courage. After her liberation from demonic influence, she appears as one of the most faithful and beautiful characters of the gospels. She greatly aided Jesus in His missionary activities as He went from place to place preaching and teaching His message. She was a faithful follower of His.

Mary was present in Pilate’s Hall and saw and heard the religious leaders clamoring for the blood of Jesus, the one who was so precious to her heart. She listened as Pontius Pilate pronounced His death sentence by crucifixion, although he had found no fault in Him. She witnessed and wept as Jesus left the hall to be spat upon and ill-treated by the crowd. Then she saw Him led out to Calvary’s fatal mount to be nailed to a tree. Mary listened with a broken heart to His bitter cries and watched through those dread hours until at last the Roman soldier thrust his spear into the Savior’s side and declared Him dead.

No sooner had Jesus dismissed His Spirit when the question arose among the Mary’s at the cross: How could they secure His blood-stained body and prepare it for burial? As Jesus’ body was being prepared and placed in the garden tomb, Mary Magdalene remained sitting against the sepulcher beholding Him until Joseph had laid the Lord’s body away. She was the first to return to the garden tomb and witnessed the most important event in world history and the pivotal truth of Christianity, the Resurrection of Jesus Christ. God conferred a great honor upon the faithful Mary Magdalene, in permitting her to be the first witness of the Resurrection!

Imagine peering into the cave, as the light of the earliest day filtered across Jerusalem…IT WAS EMPTY! She began to weep. Two angels approached her saying, “Woman why are you weeping?” Trembling, she responded through her tears saying, “Because they have taken away my Lord, and I know not where they have laid him.” And then she heard the voice that had changed everything, the voice she loved much. It was the voice of Jesus saying, “Mary.” Instantly she cried out, “Rabboni!” Casting herself before the risen Lord, she would have clasped His feet, but He said, “Touch Me not!”

Mary’s love was of a nature that leaned upon the human presence of Jesus. She and the other disciples had to rise to a higher level and learn how to have a nearer, and now spiritual communion with Him. Her earthly affection needed to be elevated to a heavenly love.

As we hear the words of Asher Intrater, spoken at our Convocation in Jerusalem, saying to us, “Come up higher,” we realize that our need for a certain kind of fellowship with Jesus is now being elevated to a higher place. Because it is not a known thing to us, it may feel uncomfortable in the beginning, but if we are willing to lay down what we have known, to enter into the unknown, we will realize that the fellowship in this new era is not based upon things we have grown accustomed to in past days. He is forging something new, something greater.

We willingly rise higher…even into the unknown…to walk more fully in the way of this new era.

Our anointing, our language, our understanding, and our revelation is changing.

Human love is being changed into Divine love.